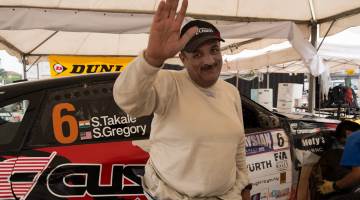 Indian rally driver Sanjay Takale feels right at home on Malaysian Roads, so the experienced driver is confident of a good result at the fifth round of the Asia Pacific Rally Championship (APRC) held this weekend in Johor Bahru.

Behind the wheel of his Cusco EZY Racing Subaru Impreza, Takale is aiming for a podium place in both the Asia Cup and Production Cup titles as well as gaining valuable overall APRC drivers’ points.

“I can look at podium finish in Asia Cup as I am only 11 points away from the third-placed driver, who is my teammate at Cusco-EZY Racing Michael Young. I am currently fifth in Asia Cup but the fight is very much there,” said Takale.

“Also in the overall APRC championship I am fourth and though Young has good lead over me, my plan would be to first finish and then earn good points in Malaysia,” he continued.

Takale’s team-mate, New Zealander Michael Young, is also his biggest rival although the pair are good friends and often swap information on the roads, cars and everything to do with the rally.

“Unfortunately and fortunately, my main rival is my own teammate Michael Young. But I know he is great driver and I have full respect for his driving abilities. He is driving a much slower car than the leaders from MRF-Skoda team, but his times are very good,” Takale explained. 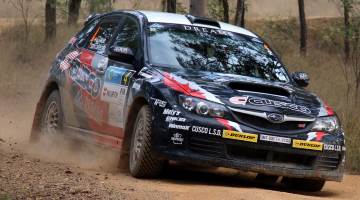 While Takale and Japanese co-driver Noriko Takeshita, who has joined Takale since the first round in New Zealand, are in the hunt for multiple podiums across the various APRC classes including the Production Cup, Takale knows they have a huge challenge ahead of them and will be drawing on his vast experience across the often car-breaking roads. Since winning the Malaysian Rally Championship in 2011, Takale has competed in the region a lot and is probably one of the most experienced drivers on these roads at the event this year.

“Malaysia is like my second home. I have done more rallies here than anywhere else. The route has slippery stages and tropical climate makes driving in Johor one of the toughest in the world. If it rains then the track becomes rough and slippery.

“Actually, you never know how slippery they are till you go on to them. The terrain is simply unforgiving, even if you make one small mistake,” explained Takale.

In the meantime, Takale’s main focus is preparing for the rally with extra fitness and eating well ahead of the official start later this week after being delayed by 24 hours at the airport, making it to testing just in time. Plus he’s joined by two very special guests who have travelled with him from India who he said he is looking forward to hosting at this event.

“Two of my friends in Media are coming for the rally. Kirti Patil and Mukund Potdar will actually be watching me drive in Malaysia for the first time. They have written reams about me in their respective newspapers, so it will be an experience for them too and I’m honoured to have them here.”