Gaurav Gill has managed to extend his FIA Asia Pacific Championship (APRC) lead further at the first day of the Malaysian Rally, after dominating the time sheets and the subsequent retirement of his closest rival and team-mate Fabian Kreim.

The much anticipated rain never arrived meaning the stages stayed relatively dry throughout the day, although drivers maintained the roads were incredibly slippery in parts and the heat made the challenge even greater.

With the retirement of his Team MRF Skoda team-mate, Indian driver Gill now only needs mere points to seal the APRC drivers’ championship a round early if he completes the rally tomorrow. 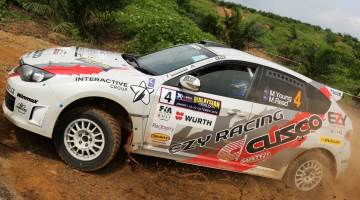 “We are really happy to be in front but the rally is not over yet and as you know Malaysia is very tricky and anything can happen at any time,” said Gill. “This rally is not just about competing against each other. It’s also about competing against the rally itself. The Malaysian Rally can bite you pretty hard and make things worse for you, so you really have to respect it.”

“The Team MRF Skoda has been great. We had some problems with overheating in the morning but nothing in the afternoon. I think that’s because there wasn’t as much grass blocking the radiator and it was a bit cooler in the afternoon, so that’s been helping the car temperatures to stay cooler.”

Meanwhile Kreim remains optimistic and vows to return on Sunday if the car can be repaired in time. “It’s all part of the game,” said Kreim upon returning to the service park. “We will hope to re-join tomorrow and keep going.”

After making a small mistake, Kreim went to select reverse and in his own words, “maybe I selected it [reverse] too quickly. Something maybe broke inside the gearbox and from there I only had first gear. It was too slow for us to continue.”

Kreim’s retirement promoted Finnish driver Jari Ketomaa to second place behind the wheel of his Mitsubishi Mirage run out of Sweden. While the car still requires FIA-homologation, it is already proving to be a threat to the Skoda R5’s here in Malaysia and may be a car to watch in future.

Ketomaa said “It was great but it has been such a tough day. I couldn’t imagine this at all. I mean, I have done many world rally events in my life and hundreds of other events all around the world but this is the most toughest day I’ve ever had.” 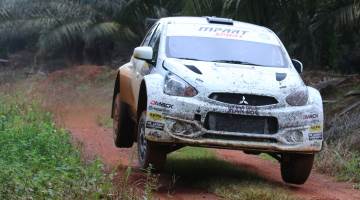 “We have had absolutely no trouble with the car at all. Obviously the speed is not what we want to be so the speed is a disappointment but we know exactly why. We know the points we need to improve and then we can get the speed up immediately,” Ketomaa continued.

Rounding out the podium in third is New Zealander Mike Young, who is also battling a head-cold making his Malaysian Rally event much harder in his Cusco EZY Racing Subaru Impreza.

“My arms were getting weak halfway through some of the longer stages and my concentration just isn’t there because of this flu. But everything is going well and we’re really happy with third,” Young said.

“We made a good tyre choice sticking with the rally tyre over the muds [mud-tyres] as the roads dried out quite a bit. We also had a puncture that cost us about 10 seconds but other than that, the Cusco car is great.”

Young’s Cusco team-mate Yuya Sumiyama ends the day in fourth after a steady drive through the tricky, narrow roads, although he also suffered a puncture during the day which also cost him time.

Completing the top five is Sanjay Takale, also part of Cusco EZY Racing in a similar Group N Subaru Impreza, who will be aiming for maximum points in the Asia Cup and Production Cup which was his main goal here.

“I am very happy with how the day has gone. I am getting quicker which is the main aim and in one stage, I beat my own time by nearly a minute in the second pass. I pulled up my socks and got on with it and hope to do it again tomorrow,” said Takale.

The Malaysian Rally continues tomorrow across six closed special stages totalling approximately 67 kilometers. The rally then concludes at Angsana Complex in Johor Bahru at approximately 4.00pm where a ceremonial finish will take place.