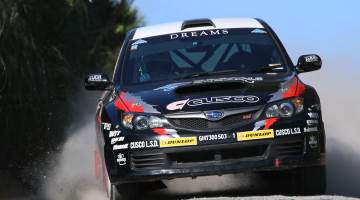 Indian rally driver, Sanjay Takale, is getting ready to tackle the first round of the Asia Pacific Rally Championship (APRC), held in Whangarei this weekend, following a one year hiatus from the sport.

Takale, who has been a regular competitor in the prestigious championship, says he’s looking forward to getting back in the drivers seat and is joined by a vastly experienced Japanese co-driver, Noriko Takeshita.

“Frankly speaking, I am excited to be back in the APRC this year. I missed out on a lot of rally action last year due to a few reasons but primarily it was due to a prolonged illness. I feel I am now ready for any challenge and am looking forward to the long winding gravel roads around Whangarei,” said Takale.

“I’m also looking forward to having Noriko [Takeshita] join me as my new co-driver. She was recommended to me by my Cusco Racing team who have a lot of knowledge in this area. She has excellent credentials and was Toshihiro Arai’s co-driver who has competed all across the world so I’m excited about this.”

The Pune-based driver will compete in all six rounds of the APRC Championship and says a major highlight is seeing the championship return to India following a 10-year absence from the country.

“Given that the Rally of India will be the last round of the season, it gives me Goosebumps to think that the APRC title would probably be decided in India. It’s a very exciting time and think it reflects the growth of motorsport in the Asia region,” said Takale.

“Plus I meet so many excited fans in Japan, Australia, New Zealand and at other rally venues, and it is time that Indian fans to come out in hordes and support home-grown rally drivers. It will be a great event I’m sure.”
Takale will again be part of the Cusco Racing team this season and is driving a newer version of the Subaru Impreza WRX he last used in at Rally Hokkaido in Japan in 2014.

“I last drove a Cusco Subaru in Hokkaido [Japan] so it has been a long time. Although I did an ice rally in Sweden and went to a rally school in Wales so I do feel prepared.

“I also took part in an autocross, hillclimb and rally-sprint event in Arunachal Pradesh [north-east India] recently and I feel these experiences will carry me forward when I compete in New Zealand this weekend,” explained Takale.

The International Rally of Whangarei starts on Friday and continues over Saturday 30 April and Sunday 1 May around the far north city across 16 closed special stages and 275 competitive kilometres.