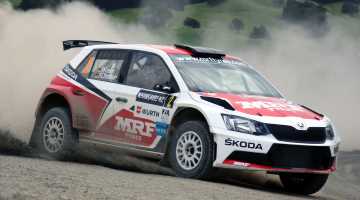 Only four seconds separate first and second place after the opening day of the first round of Asia Pacific Rally Championship (APRC) held today, with gravel newcomer Fabian Kreim of Germany taking the lead in the final stage.

Kreim’s Skoda team-mate, Gaurav Gill (India) and Australian co-driver Glenn Macneall held the lead for most of the day until they lost over 40 seconds in the final 14 kilometre test due to a puncture four kilometres from the end of stage 10.

Despite maintaining his focus is on simply finishing the rally, and that he wouldn’t chase Gill, Kreim with co-driver Frank Christian managed to grab the lead and said: “Unbelievable! I did not expect that [to be leading] because we also have some problems but have not lost so much time.”

“Tomorrow it will be same like today. We’ll just be driving and I think tomorrow Gaurav [Gill] will be very fast. We talk together before every stage and they [Gill and Macneall] give me some very important tips and I hope I can use this.”

Meanwhile, Gill is still getting used to the car said: “Unfortunately we had a puncture in the last stage, about four kilometres from the finish. We lost about 40 seconds to our team-mate, so we’re down about five seconds tonight, but that means we’re going to start second on the road tomorrow which I’m happy about.”

“Obviously I would have wanted my 50 second lead but I’ll live to fight another day. We’ll also be doing some setup changes with the car tonight so tomorrow should be good.”

Both Team MRF drivers say the new Team MRF Skoda R5’s are great cars and are very responsive, and their pace is reflected in the dominant lead they have over third place.

Local duo Michael Young and Malcolm Read finished the day in third despite their 13 minute deficit overnight, after winning stages in both the APRC and New Zealand Rally Championship (NZRC) fields and moving up the leader board as their rivals encountered problems.

Young said: “It’s been a really good day for us. With our 14 minute handicap I just said to Malcolm ‘lets see how much we can pull back’ so to get back into third in one day is pretty awesome.”

“Tomorrow we will keep up our pace as that has seemed to work well for us today and it keeps me focused. And we’re obviously stoked to win a couple of the New Zealand Rally Championship stages which was another pleasant surprise.” 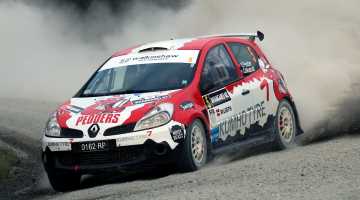 Scott Pedder and co-driver Dale Moscatt from Australia, who were holding third until stage five, were forced to retire because of mechanical issues and are not expected to re-join tomorrow.

Cusco driver, Sanjay Takale (India), was also forced to temporarily withdraw from the day following an electrical issue on the second stage of the morning. The Cusco team have now fixed the problem and Takale and Japanese co-driver Noriko Takeshita will be re-joining tomorrow.

The rally, typically known for its fast and flowing roads, quickly became the rally of attrition today after almost all of the crews suffered various issues particularly with tyre wear, with only the Team MRF crew having a relatively trouble free run.

The three Japanese crews also enjoyed the stages today, often explaining them as slippery, fast and fun. Mitsubishi driver Makoto Kawahara and co-driver Osamu Yoda finished in fourth ahead of their compatriots, Tatsuo Koizumi/Takumi Takahashi and Fuyuhiko Takahashi/Shigeru Ikeda, who both in Subaru Impreza’s.

The action starts again at 08.06 am over six iconic Northland stages totalling 120 competitive kilometres held to the south of Whangarei.