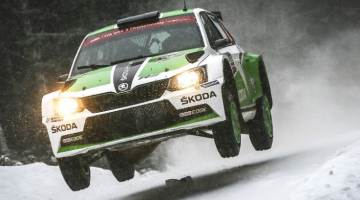 Current APRC driver’s champion Pontus Tidemand scored his best result on his home rally, the WRC Rally of Sweden in the weekend with second in WRC2.

Tidemand lost 50sec in the opening day with a broken driveshaft on his Skoda Fabia R5, but despite a determined recovery, the Swede was unable to reel in eventual WRC2 winner Elfyn Evans.

“I am happy with second place – that is my best result at my home rally to date. It was also my debut rally with my new co-driver Jonas Andersson. We worked in fantastic harmony right from the word go, and I am really looking forward to the coming rallies with him”, said Tidemand.

Tidemand’s Skoda team-mate and former APRC driver Esapekka Lappi from Finland delivered an impressive performance on the closing power stage on Sunday, on which he not only got the best time in the WRC 2 category, but in the final metres also overtook Anders Grøndal (N) for third place in WRC2. 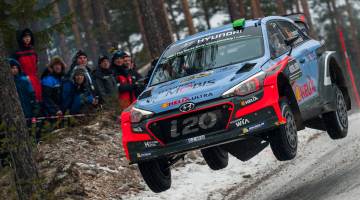 New Zealand’s Hayden Paddon matched his career-best result on his debut in Hyundai’s new i20 by finishing second overall and became the first non-European driver to finish on the Sweden podium.

He survived a late scare after hitting a wooden post metres from the finish of the last stage. The impact damaged the radiator and Paddon and co-driver John Kennard filled a small hole to stem a fluid leak before driving cautiously on the 85km liaison section to the finish.

“A podium is a fantastic result for me and everyone in the team. We were hoping to have had a less stressful finish to the rally but unfortunately we had some water leaking from the radiator after hitting a wooden post in the stage, which required some quick repairs. Thankfully, we were able to find a temporary fix and get back to service with our second place intact! Late drama aside, we have had a good weekend and I have felt very comfortable in the New Generation i20 WRC. We made the most of our road position when we had to, and refused to get drawn into a fight for the lead. In the future, we will fight more for the win but there’s a bit more work needed on my driving and on the car set-up. We’re not far away and, for now, we’ll happily take second place.”