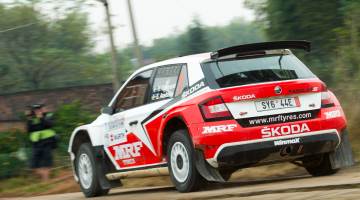 One of the world’s fastest young rally drivers, Pontus Tidemand, has driven his Team MRF Skoda Fabia R5 to a dominant victory in the final round of the Asia-Pacific Rally Championship (APRC), the China Rally Longyou.

Debuting the Fabia R5 in one of Skoda’s strongest markets, the 24-year old Swedish star won all 13 stages of the event, taking victory by over 30 minutes.

Rain for the duration of the rally made it an incredibly tough test of man and machine, but Tidemand and co-driver, Emil Axelsson, easily won their fifth APRC rally from six starts this season.

Their Team MRF team-mates, Indian Gaurav Gill and Australian co-driver Glenn Macneall, challenged for the lead early on the first day, but slid off the road in the treacherous conditions, putting paid to their chances of a good result.

“I must say that it was a huge challenge,” Tidemand said of his first visit to the Chinese event. “I drove these stages for the first time and the roads were tricky and demanding in themselves, but with mud and rain, they got extremely slippery and difficult to get through. We were as careful as we could in order to survive. 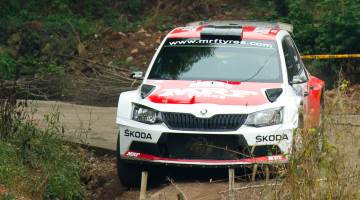 “This victory was far from a walk in the park. We have consumed enormous amounts of focus this weekend. To have a good lead is positive of course, although it was a shame to not get that close fight with Gill.

“But this time I actually think that the roads have been our biggest competition. If you lose your concentration for just a brief moment, you can slide off the road and get stuck in a ditch and suddenly your advantage is gone.”

The China win capped off a superb debut season for Tidemand in the APRC, and follows victories in New Zealand, Australia, Malaysia and Japan.

“I’m incredibly happy with the season in Asia and Oceania and it feels really great to finish on top here in China,” he added. “The APRC has been an adventure since the first event in April and I have had experiences that I could not have got anywhere else, and I will always have those experiences with me. Team MRF gave me the best possible opportunities to succeed and Emil has done a superb job all year.”

Team MRF boss, Lane Heenan was thrilled with the performance of Tidemand and the Race Torque prepared Skoda Fabia R5. “Debuting the new Fabia R5 here in China was always going to be challenging, but with the atrocious weather conditions all weekend, it added an extra element for the entire Race Torque team,” Heenan said.

“Pontus drove incredibly well and showed once again that he is a tremendous talent and that he has big things in store for him on the world stage. To win five from six events on his debut in the championship is an incredible performance.” 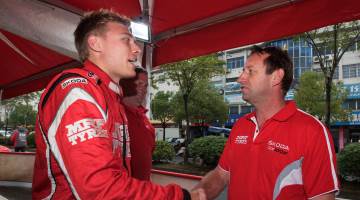 In contrast, Heenan said he disappointed that Gill’s season hadn’t finished on a more positive note. “To lose Gill early in the event was disappointing, but it has been one of those years for him where not much has gone right – other than his victory in New Calendonia. He was driving the S2000 car here in China, but was showing incredible speed with some really fast split times. I’m confident he’ll bounce back in future rallies.”

Despite his retirement, Gill still finished third in the championship, upholding his strong recent APRC performances.

Japanese driver, Hitoshi Takayama, finished second in a Subaru, while New Zealander Mike Young was third in a Subaru, despite power steering problems.