ŠKODA will celebrate a title treble in the FIA Asia-Pacific Rally Championship (APRC) when it lines up in the core market of China. The grand finale at the China Rally Longyou from Friday to Sunday will be something of a triumphal procession for the Czech automobile manufacturer. Ahead of the final round of the season, ŠKODA has already secured its fourth successive Manufacturer title in the APRC.

Works driver Pontus Tidemand (S) and his navigator Emil Axelsson (S) are also guaranteed a title* in the Driver and Co-Driver championships. They were victorious at last weekend’s Rally Spain in the FIA World Rally Championship (WRC 2). The highlight of the season will also feature a first in China: Tidemand/Axelsson will present the new ŠKODA Fabia R5 for the first time in the Middle Kingdom.

“China is the most important market in the world for ŠKODA. As such, we are particularly delighted to be able to show the tens of thousands of fans our new ŠKODA Fabia R5 live in action,” said ŠKODA Motorsport Director Michal Hrabánek, who went on to praise the performance of the ŠKODA MRF Team over the course of the APRC season so far. “It is an outstanding effort to have already wrapped up three titles before the final rally – and for the fourth time in a row. I would particularly like to congratulate Pontus Tidemand and Emil Axelsson, who have proven to be the real deal in their first year with ŠKODA.” 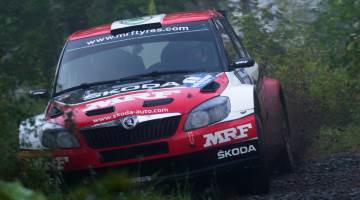 In the five rounds of the APRC season so far, the ŠKODA works duo of Tidemand/Axelsson have claimed four victories in New Zealand, Australia, Malaysia and Japan. They also finished runner-up at the Rally New Caledonia – but even here the ŠKODA MRF Team had cause for celebration, as victory went to the second crew of Gaurav Gill/Glenn Macneall (IND/AUS). “We are happy to have won such an important title in our first year with ŠKODA – and at difficult rallies, which were completely new to us. That is definitely cause for celebration, but not until after the season finale: before then, we want to thrill our fans in China with the fantastic ŠKODA Fabia R5. We know this is a particularly important rally for the ŠKODA brand,” said Tidemand.

The 24-year-old Swede headed straight from the penultimate round of the FIA World Rally Championship (WRC 2) in Spain to China – almost 10,000 miles away. As well as the huge distance, Tidemand/Axelsson must also overcome a time difference of seven hours. The two ŠKODA duos of Tidemand/Axelsson and Gill/Macneall will face about 230 kilometres against the clock, spread over 13 special stages at the China Rally Longyou. Tens of thousands of spectators are expected for the first outing of the new ŠKODA Fabia R5 in China.