The Rally of Malaysia provides some of the toughest stages in the Asia Pacific Rally Championship.

After winning all three rounds of the Asia-Pacific Rally Championship (APRC) so far this season, the dominant Team MRF squad are eyeing a fourth win at this weekend’s Rally of Malaysia.

Traditionally, the Rally of Malaysia dishes up temperatures of around 30 degrees, with 95% humidity – something that the young Swede or his co-driver, Emil Exelsson, aren’t at all familiar with.

“The heat will definitely be our worst enemy during the weekend,” Tidemand says. 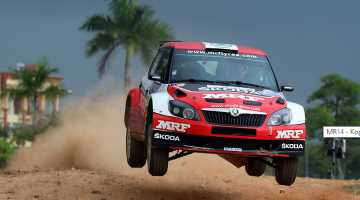 “It is nice for a day on the beach, but when you are not used to these temperatures and you are also trapped in a car with a lot at stake, the challenges you usually face at a rally become even bigger.

“But the will to succeed is there and it will be fun to challenge myself and push my own limits. It becomes even more exciting now that you compete just as much with yourself as you do with your actual competitors.”

Gill and co-driver Glenn Macneall were convincing winners in Malaysia last year, so come into this event with plenty of confidence, despite retiring from the previous APRC round in Queensland in June.

“It was unfortunate not to get the result we were after in Queensland, but we had a great battle with Pontus and I’m looking forward to renewing that competition in Malaysia this weekend,” Gill said.

“I have a lot of experience of this event, and that gives me confidence to achieve a good result.”

Tidemand and Gill will face a new challenge in Malaysia, with 2005 APRC champion, Jussi Valimaki, returning to drive a Mitsubishi Lancer Evo X. The Finnish star last contested the event in 2007.

Tidemand and Gill’s other main rivals are likely to be New Zealander Mike Young in a Subaru WRX, and Indonesian Subhan Aksa in a Lancer Evo X.

The Rally of Malaysia is widely regarded as the roughest of all APRC events, putting extra strain on not only the drivers and co-drivers, but on the cars they drive over the narrow and twisty stages.

Team MRF’s Race Torque-prepared Skoda Fabia S2000s have not only been the fastest cars in the APRC in recent seasons, but have also been the strongest and most reliable.

“The Skoda Fabia S2000 is the most successful S2000 car ever, and we are confident the cars and MRF Tyres are up to the task of winning at each event we attend,” Team MRF boss, Lane Heenan, said.

“The APRC gives us such diverse conditions that the car needs to be capable of coping with widely varying roads – whether that be that smooth, flowing roads of New Zealand, or the rougher plantation roads in Malaysia.

The event is based in the city of Johor Bahru in western Malaysia, and after a ceremonial start on Friday night, the crews will tackle 14 special stages, totalling 226.56 km, on Saturday and Sunday.

Although the event is generally slower than other APRC rounds, deep ditches on the outside of corners provide an extra challenge for competitors to negotiate.

The Malaysian Rally has been part of the Asia Pacific Rally Championship since its inception as a regional rally championship in 1988.