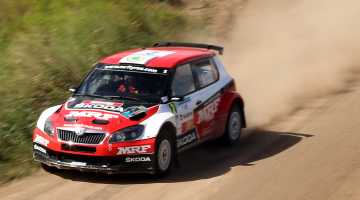 The podium at the second round of the Asia Pacific Rally Championship (APRC), held in New Caledonia, has been dominated by Team MRF with Gaurav Gill of India eventually taking the win ahead of his two team-mates.

Piloting his Team MRF Skoda Fabia S2000, Gill took the lead on the first stage on Saturday after his Swedish team-mate Pontus Tidemand got a puncture and lost over two minutes as a result.

Gill said: “It’s been a great weekend for us and the team. We had some small issues at the start of the weekend but the team made a good effort and got it sorted which helped us get the confidence back in the car. We had a great day on day one and day two we were in good position to control the rally.

“We’re here first and second which is the most important thing. It has been a great effort by the team, and the tyres worked well,” said Gill at the finish ceremony. 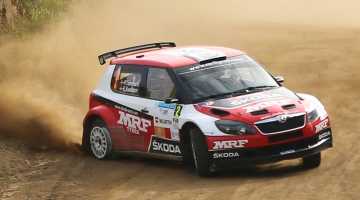 While Gill and co-driver Glenn Macneall simply drove to conserve his lead, Tidemand fought back on day two in his Skoda Fabia S2000 on debut in New Caledonia to close the gap from two minutes to only 39 seconds over only 119 competitive kilometres.

“We had more good experience on this rally, it is a different surface and for sure, we had a puncture in the first stage it was my mistake. We hit a little wall so that’s destroyed our weekend, well not destroyed it but made it not easy,” said Tidemand.

The young Swede and his co-driver Emil Axelsson leave New Caledonia tonight for the next World Rally Championship round, Rally Portugal, next weekend where he will debut Skoda Motorsport’s new R5 car. 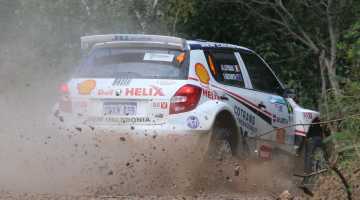 “It is my first WRC event in the new car with Skoda Motorsport so I’m really looking forward to that.”

The final podium spot was filled by local driver Jean-Louis Leyraud in his Skoda Fabia S2000 who said: “We finished on the podium as I wanted. It is very good and I am leading the New Caledonia Championship and I’m the first New Caledonian driver.”

“It was very difficult and very slippery, especially this afternoon. My goal was just to finish, not to try too hard and not to make mistakes,” continued Leyraud. 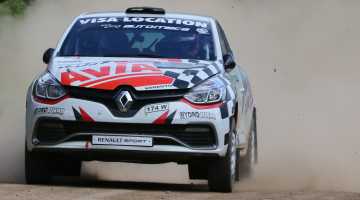 The Team MRF team-mates now sit neck-and-neck in the overall APRC Drivers’ points with only three points separating them, as they head towards the International Rally of Queensland next month which also doubles as the final round of the Pacific Cup.

Another New Caledonian driver Eugène Creuhnet in a Mitsubishi Evo 9, was 4th, followed by French national Manu Guigou who moved up a spot on Day2 to finish 5th overall and win the two-wheel class in his Renault Clio R3t.