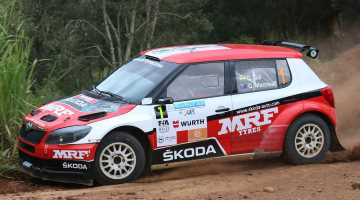 The second round of the Asia Pacific Rally Championship (APRC) is set to start later today in the tropical territory of New Caledonia as drivers prepare to tackle new roads in the tricky event.

Former APRC Champion, Gaurav Gill of India, has won the New Caledonian rally twice (2012 and 2013) and finished in the runner-up position last year and says his experience on these roads should give him an advantage over his Team MRF team-mate Pontus Tidemand.

“Compared to my teammate, I have the experience of driving on these tracks which can turn out to be an advantage for me. The idea is to go flat out in the opening stages to open up as much lead as possible,” said Gill.

“Tidemand is a good driver and I relish the challenge of driving against a teammate who can push me. It brings out the best in me.”

However Gill adds the new stages are an added challenge but he still remains confident in his team ahead of the two-day event, held north of Noumea near the towns of Poya and Farino. 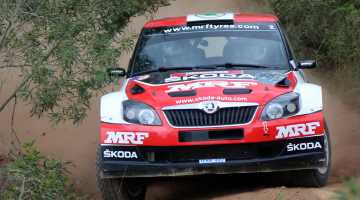 “The roads are all new, quite technical with hundreds of crests and pace notes are going to be the key and we’re quite confident of our notes. It’s a new rally but a long rally, so let’s see as it’s very easy to make a mistake here, so from the first stage my plan is to keep it together and work on getting my rhythm back, settle in and take it from there” said Gill at the start ceremony in down-town Noumea.

Despite competing in New Caledonia for the first time, Swedish driver Tidemand is optimistic about the experience of competing on the muddy and often slippery roads.

Tidemand said: “This year consists of many new experiences since every event is completely new for me, and Rally New Caledonia is no exception.

“Our biggest goal this weekend is to make it all the way to the finish line and, of course, to do it as best as we can with a result as good as possible. I look forward to another challenge!”

Rallye De Nouvelle-Caledonie also doubles as the second round of the Pacific Cup, which local driver and fellow Skoda S2000 driver Jean Louis Leyraud is also competing for. 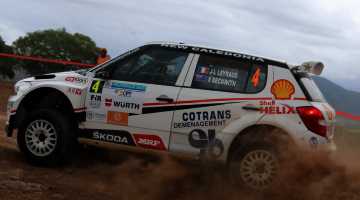 “I’m looking forward to seeing what I can do with the Skoda, because New Zealand was the first time with the car, first time Scott as a co-driver, and no rallying for 8 months so I took it easy. But here I will try to push a little bit more, but I know I cannot catch the two [Gill and Tidemand] in front of me.”

Guigou is driving a brand new R3 turbo charged 1.6 Renault Clio and won the Rally of New Caledonia outright in 2013 with the new turbocharged Renault Clio promising to be good for the gravel as it has more torque.

“It will be difficult to fight with the four wheel car on gravel but I will do my maximum. The roads are really tricky with lots of crests, but really fantastic!”, said Guigou before the start.

Rally New Caledonia is located to the west side of the main island, Grande Terre. The start ceremony and the first two stages, a super special run twice, takes place near the capital Noumea in the southern part of the main island. On Saturday and Sunday, the event moves north and the remaining stages will be run in the area between Poya and Farino, with the service park in Bourail. In total, competitors will face 16 special stages totalling 245km.