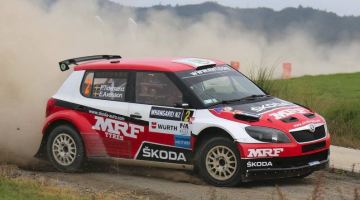 The challenge of tackling New Zealand’s fast and flowing rural roads for the first time has seen 24-year-old Swede Pontus Tidemand rocket to the top of the time sheets after today’s first day of competition at the International Rally of Whangarei.

A total of 48 cars left Whangarei this morning – seven in the international field and 41 contesting the national/club category. Covering eight special stages to the north, light overnight rain and passing showers during the day did little to dampen the drivers’ competitive spirit – with many encountering all number of niggly issues.

First car to start each of the day’s stages Gill was languishing in the thicker gravel – and while trying to minimise the time loss to the following cars was further hampered by a differential problem.

“All the stages we were constantly losing time. In the last two we lost 40-50sec on really fast roads. Every time we would steer in one direction the car would try turn-around. I want to get the car back and finish here with the maximum points we can get. Just a bad day and we have to live with that,” said the 33-year-old Indian.

For Tidemand the lead was less of concern: “At this pace I think I can manage safely so we will stay where we are.
“It was a very good afternoon; the day has been fantastic and so we’ve enjoyed it. There are so many cars having problems so we just have to try stay away from that.” 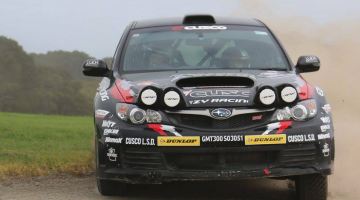 His first time campaigning an all-wheel-drive car, 22-year-old Young was earlier focused on learning how the car reacts in various situations. Having finished third overall at the event in 2014 and runner-up in the overall championship he said the afternoon’s result leaves him well placed for a podium placing.

Leading the national field American pairing Ken Block and Alex Gelsomino (Ford Fiesta H.F.H.V) sit over a minute clear of Mt Maunganui’s David Holder and Rob Scott in the Mitsubishi Lancer EVO 8. Early leader Alex Kelsey and Mal Peden (Kelsey MC2) succumbed to a clutch failure after the fifth stage. Other casualties included Emma Gilmour and Anthony McLoughlin with electrical trouble in the Suzuki Swift Maxi while Auckland drivers Andrew Hawkeswood and Shannon Chambers both had roll-over incidents. Third for the day is Auckland’s Ben Hunt and Tony Rawstorn (Gull Subaru) while Tauranga’s Phil Campbell and Venita Fabbro are fourth – yet third in the NZRC standings.

Following end-of-day service the cars are again parked overnight ahead of Sunday’s six remaining stages. Set south of Whangarei two repeat runs (once in the morning and repeated in the early afternoon) use three groups of road familiar to many of the events competitors. Finishers will be recognised at the 3pm ceremonial event – held at Whangarei’s Quayside town basin. Along with the celebratory national anthem of the winning team, the top-three finishers are further recognised by their nation’s flag being shown adjacent to the winners’ dais.