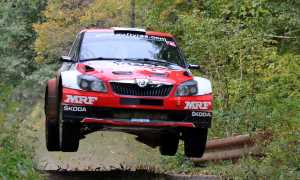 Team MRF Skoda will be hoping to complete the perfect season at this weekend’s China Rally Longyou when they aim for their sixth win from six starts in the 2014 Asia-Pacific Rally Championship (APRC).

With Czech driver, Jan Kopecky, clinching the 2014 APRC driver’s crown at the previous round, he and team-mate, Gaurav Gill (India), will be going head-to-head for victory in the Team MRF Skoda Fabia S2000s.

Both drivers have been evenly matched this year, with Kopecky being a little more consistent on his first season in the APRC. His 2014 title comes after he won the 2013 European Rally Championship.

“It’s been a great experience competing together in all these different countries, and again China will be something new,” Kopecky said, ahead of the final round.

“Hopefully we can see some nice things in China, because the memories from these countries no-one can take it away.”

Team MRF Skoda’s title win is their fifth, and their third in a row, and the team will be celebrating their success after the China Rally.

“I’m absolutely delighted and it’s all the better to be able to travel to the APRC season final in our most important market, China, having already notched up these wins,” ŠKODA Motorsport Director Michal Hrabánek said.

“The victories have been hard fought and are a real credit to all the Race Torque guys who prepare the cars,” Team MRF Skoda boss, Lane Heenan, said.

“The APRC provides some of the most challenging conditions in world rallying, from the fantastic roads in New Zealand, right through to the slippery tracks and unpredictable weather in Malaysia.

“Throughout the past three seasons the Skoda Fabia S2000 has been the car to beat, and has really proved itself in these conditions.”

This weekend, Jan Kopecky and Pavel Dresler, and Gaurav Gill and Glenn Macneall, will face 13 closed road special stages over a mixture of gravel and concrete surfaces that will test them to the limit.

In a total competitive distance of 231 kilometres, the event’s longest stage is the 25.64km Mu Chen test, which will be run as stage eight and 11.

The China Rally is based in the city of Longyou, 400 kilometres south-west of Shanghai and 200km from Hangzhou, the capital city of Zhejiang Province.

Longyou has a long history. It’s 2236 years since its foundation, and on one side of the city, there are bamboo covered mountains, hills, plains and rivers; on the other side peaks, cliffs, caves, stones, pools and lakes.

It will once again provide a fitting finale to the Asia-Pacific Rally Championship.