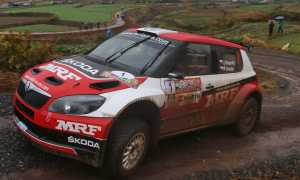 After yesterday’s spectacular start ceremony followed shortly after by a SS1, a 2 kilometre super-special in front of thousands of spectators, today’s China Rally was full of drama from the start.

Steady overnight rain turned the gravel stages into super slippery mud tracks as Mike Young found out in the first 500 metres of stage 2. The New Zealander slid of the road in his two-wheel drive Proton and needed help from spectators to get going again, losing just over a minute. 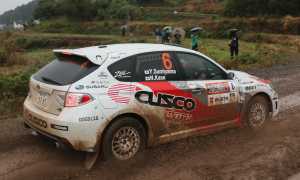 This year’s Asia-Pacific Rally champion Jan Kopecký from the Czech Republic stayed out of trouble, winning the stage and improving his lead on Gill to 18 seconds.

Gill fought back though on Stages 3 and 4 with some excellent times, to head into the lunch-time service-break with a 7 second lead.

On the second run through the San Men Yuan mountain stage Pedder retired after hitting a rock and breaking a steering arm, while Gill lost over 40 seconds to Kopecký after he too had problems in the stage.

But worse was to come on Stage 6 when Gill suffered the same fate as Pedder, a rock breaking a steering arm leading to instant retirement. Both drivers are expecting to re-start tomorrow. 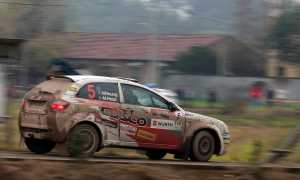 Untroubled Kopecký won all the remaining stages of the day in his MRF Skoda Fabia, while just behind Japan’s Yuya Sumiyama is 2nd overall and leading Asia Cup. In the atrocious conditions both Kopecký and Sumiyama can be commended, driving exceptionally well and bringing their cars back to evening service extremely dirty but undamaged.

After his earlier scare, Young is 3rd overall and with Pedders retirement adds the 2014 Production Cup to his tally for 2014.

EZY Racing’s Dinesh Deheragoda from Sri Lanka found the conditions very difficult, especially when his Mitsubishi windscreen fogged up for most of the mountain stage. Deheragoda is pleased to be 2nd in Asia Cup and 4th overall.