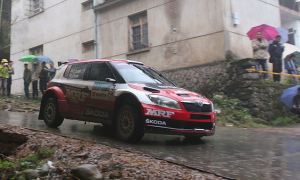 After winning Japans’ Rally Hokkaido, Jan Kopecký from the Czech Republic heads to this weekend’s China Rally (7-9th November) as the 2014 FIA Asia Pacific Rally Champion, a victory that follows on from winning the European Rally Championship in 2013.

As with all the APRC events this year for Kopecký, China Rally will be a completely new country, new culture and road conditions but something that the Czech driver has relished and enjoyed in his year in the APRC.

“Its been a great experience competing together in all these different countries and again China will be something new. Hopefully we can see some nice things in China because the memories from these countries no-one can take it away.”

For the third year in a row Skoda are planning to celebrate their win in the APRC’s manufacturers championship at China Rally “I’m absolutely delighted and it’s all the better to be able to travel to the APRC season final in our most important market, China, having already notched up these wins,” commented ŠKODA Motorsport Director Michal Hrabánek. He singled out the new champion Kopecký for particular praise, following wins by Chris Atkinson (AUS/2012) and Gaurav Gill (IND/2013) to complete the car maker’s title hat-trick in the APRC.

With the main FIA APRC titles decided, China Rally will see a fight for the APRC’s Asia and Production Cups. Japan’s Yuya Sumiyama has won the Asia Cup title twice before and heads to Longyou where the rally is based, with a 12 point advantage over China’s Jun Xu where Xu’s ‘home-town’ knowledge could be a big advantage.

It’s more clear-cut in the Production Cup battle where New Zealander Mike Young in a 2WD 1600 cc Proton has a 29 point lead over Mark Pedder from Australia. Pedder should easily win the round in his turbo charged 4WD Mitsubishi Evo 10, however Young who has already wrapped up the 2WD and Junior titles, only needs to score 11 points or more to take home his third FIA trophy for 2014.

EZY Racing’s Dinesh Deheragoda from Sri Lanka will continue his quest for the Asia Cup, hoping to have a better event than Japan when his Mitsubishi was plagued by mechanical problems.

China Rally is based in the city of Longyou, 400 kilometres south-west of Shanghai and 200 km from Hangzhou, the capital city of Zhejiang Province. Longyou has a long history, 2236 years since it’s the foundation and on one side of the city, there are bamboo covered mountains, hills, plains and rivers; on the other side, peaks, cliffs, caves, stones, pools and lakes.

The event features a mixture of gravel and concrete surface stages totalling 231 kilometres.