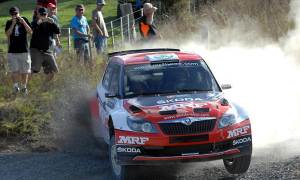 The Malaysian Rally is perhaps the toughest event in the Asia-Pacific Rally Championship. And Indian driver, Gaurav Gill, will be hoping that a new car will be just what he needs to get his Asia-Pacific Championship campaign back on track in Malaysia this weekend.

The Team MRF driver crashed out of June’s Rally of Queensland, and now trails his team-mate, Jan Kopecky, by 39 points in the battle for the title. However, his experience of the Malaysian Rally could prove decisive as the event’s slippery stages and tropical climate make this one of the toughest rallies in the world.

While Gill and co-driver, Glenn Macneall, will drive a brand new Race Torque-prepared Skoda Fabia S2000, team-mates Kopecky and Dresler will have a new engine fitted to their car, which could see them take a first-up Malaysian victory.

“This event is usually tricky on technical roads that are very slippery when wet,” Team MRF boss, Lane Heenan said. 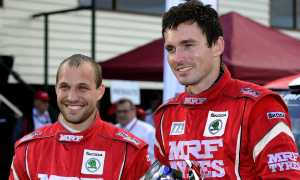 “The temperature and humidity makes this one of the toughest rallies anywhere in the world and is a real test of the crews’ stamina.

“Jan has been going to the sauna and wearing his overalls for the last few weeks to help get used to the conditions here, and both drivers and co-drivers will wear cool suits with ice water circulation to prevent fatigue.”

Team MRF will be hoping to get both cars to the finish and to consolidate their already considerable championship lead.

While they’re hoping for a dry event, rain in Malaysia can often be very localised, making tyre choice more difficult than at any other event in the championship. Temperatures during the day are expected to be around 30 degrees, with high humidity.

After a promotional start at a local shopping centre on Friday evening, the Malaysian Rally continues on Saturday and Sunday with 14 stages covering a total competitive distance of 217 kilometres.

The longest stage of the rally is the 26.32km Tai Tak stage, held twice on the first day.

After Jan Kopecky won the Pacific Cup covering the first three rounds of the Asia-Pacific Rally Championship, Team MRF have entered Gill in the Asian Cup, of which this event is the first round.