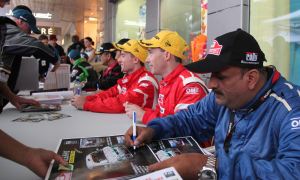 Upping the competitive ante for teams contesting the 11 to 13 April running of the VINZ International Rally of Whangarei will be the Saturday night action at the William Fraser Memorial Park location of Pohe Island.

The Hella Pohe Island Super Special stage venue accounts for two of the 14 speed tests competitors from India, Japan, China, Czech Republic, Australia and New Zealand will be challenged by. As the opening round of the FIA Asia Pacific Rally Championship (APRC), Brian Green Property Group New Zealand Rally Championship, driven by VINZ (NZRC) and Top Half Rally Series (THS) there will be a variety of makes and model of car from brand new factory supported ŠKODAs to forty year old Ford Escorts.

The rally itself beings with a signing session (3:30pm) and ceremonial start at the Cameron Street Mall from 4:30pm Friday 11 April – ahead of the weekend’s action. Following six special stages to the north of Whangarei on the Saturday teams then return to tackle the short-sharp 1.25km Hella Pohe Island Super Special Stage from 7pm. The first time the event has run cars in the dark, lighting towers will illuminate areas spectators can take advantage of.

Preceding the special stage will be a number of activities run by Whangarei Lions Club groups. Activity starts at 3:30pm with the Mitre 10 Mega Whangarei TriKids Duathlon that includes a cycling and running course to challenge keen kids between ages 5 to 13 years. Entry of $15 includes a gear pack and entry for one adult to the venue – that includes the evening running of the Hella Pohe Island Super Special Stage.

Prizegiving for the Mitre10 Mega Whangarei TriKids Duathlon will be held at 6pm – just prior to the first of the safety car checks of the rally stage.

Lights go green for the first rally car at 7pm with the second car starting 30 seconds later. The action intensifies with each passing car – having started in reverse seeded order, meaning the events fastest cars will start last.
Their second attempt is expected to start 40 minutes later.

“This is a really exciting initiative that brings a greater level of action to the Pohe Island venue, that mixes the grunt of the Mitre10 Mega Whangarei TriKids Duathlon and Lions group activities with the best rally drivers in the Asia Pacific – in one family friendly venue,” says Laurie Brenssell, chairman of the VINZ International Rally of Whangarei organising committee.

“After a day’s competition most cars and drivers will be on their game – and some may even sport a few scars as they tackle the Hella Pohe Island Super Special Stage. One thing is for sure – they won’t be taking it easy and the challenge of darkness with lights may throw a few off course – so be ready for spills.”

The cars are then securely parked for the night ahead of a further six special stages to be held south of Whangarei on the Sunday. They then return to the Quayside Town Basin for a ceremonial finish from 3pm in the afternoon.

Access to the Hella Pohe Island Super Special Stage and Lions Club Family Fun Day is off Port Road. Use the car parking adjacent to the Hatea Bridge and walk across to get access to the area. Riverside Road access will be closed.

Spectating at the rally start, finish and Quayside Town Basin service areas are free with access to rural viewing points costing just $10 per adult per day and $15 for the Hella Pohe Island Super Special Stage. Children under the age of 15 are free with a paying adult and paddock parking is available at some locations for a gold coin donation.
A share of all spectator ticket revenue goes to the local community groups that help run the spectator viewing areas.

A rally map is available free to download from the event website www.rallywhangarei.co.nz (in the spectator info section), or it can be collected from rally headquarters at Quayside Town Basin (from 9 April) or found in the rally insert published in the Northern Advocate on 9 April.