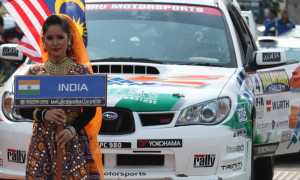 After the successfully running the Chikmaglur Rally in December 2013 as a qualification event and having received top marks for a well-run and challenging event, the FIA had scheduled India as an Asia Cup round in the 2014 FIA Asia Pacific Rally Championship on 25-27th April.

Unfortunately with India’s National Elections due to be held by the end of May the April date is no longer viable and a new date required. Finding a slot in the already tight APRC schedule has proved too difficult, especially when June through August is the Monsoon period in that part of the world. The organisers have therefore, taken the decision to with-draw the event from the 2014 calendar and work towards 2015.

A joint statement was received from India Rally Commission Chairman Ashwin Pandit and Vicky Chandhok, President of the Federation of Motor Sports Clubs of India (FMSCI) confirming 2015 as the best option.

“After trying all permutations and combinations, we are left with no option but to stay out of calendar in 2014. We will be definitely be in for 2015 and will prefer a November date for Chikmagalur. Parliamentary elections due in April + May and then monsoon are the main reasons for staying out in 2014. We’d like to thank the APRC officials for their support and guidance as we build towards a great event in 2015”.

“We’re really disappointed we couldn’t find another date”, said APRC Co-ordinator Murray Brown. “India’s a huge part of our region and our Championship with two top drivers and MRF Tyres a major team sponsor, we really wanted this to work. They have a very efficient organising team and a challenging event in Chikmagalur, so we look forward to India being on the calendar for 2015”.

In another alteration to the 2014 APRC calendar the organisers of the Thailand Rally have requested that their event be run a week early than originally scheduled to coincide with the King’s birthday – new date 5-7th December.

The new 2014 APRC calendar as approved by the FIA is as follows: