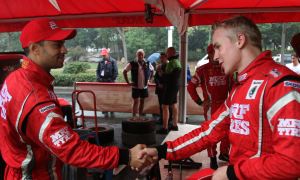 Driving for Team MRF ŠKODA alongside navigator Glenn Macneall, Gill finished runner-up to team-mates Esapekka Lappi and Janne Ferm in his Fabia Super 2000. He could have challenged for victory had he not lost approximately three minutes stopping to change a puncture on stage six.

Gill’s title triumph is the second in a row for the Race Torque Engineering-run Team MRF operation following Chris Atkinson’s success in 2012. ŠKODA has successfully defended its APRC Manufacturers’ crown, while Team MRF ŠKODA is the winner of the APRC Teams’ award ahead of Cusco Racing of Japan. 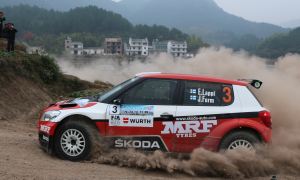 “We’re really happy,” said ŠKODA Motorsport’s Pavel Hortek. “We fulfilled what we planned to do at the beginning of the season, to win again all the championships in both categories. My thanks to the winning crew Garav Gill and Glenn Macneall. This is very important for them, especially for Gaurav who deserves very much to finally win the APRC after trying for so many years.”

Gill, 31, has enjoyed a hugely successful APRC season in 2013 with victories in New Caledonia and Japan and second-place finishes in New Zealand and China. Meanwhile, Lappi’s first place in China marked his third victory of 2013. However, non-scores in New Caledonia, Malaysia and Japan ruled him out of the title fight, although his win in China means he finishes runner-up to Gill in the final standings. 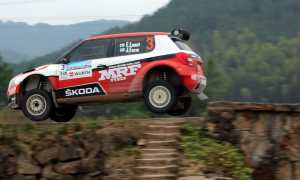 China Rally Longyou once again lived up to its reputation as one of the most challenging events on the APRC calendar. Based in the Zhejiang province in eastern China, 400 kilometres from Shanghai, the stages use a mixture of gravel and concrete roads. But with rain falling, drivers reported the concrete sections were extremely slippery. They also faced two rock-strewn mountain stages, while brake problems and a spin for Lappi on Saturday morning added to the drama.