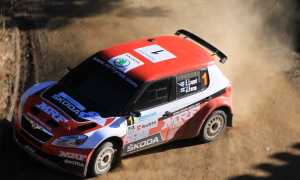 Esapekka Lappi has moved back into the lead of the FIA Asia-Pacific Rally Championship by winning the International Rally of Queensland today (Sunday). The 22-year-old from Finland, co-driven by Janne Ferm, claimed a commanding victory, his second of 2013, with Australian Simon Knowles clinching the FIA Pacific Cup.

But while Lappi celebrated, there was frustration for his fellow Team MRF ŠKODA driver Gaurav Gill. The winner last time out in New Caledonia was in trouble on Saturday’s second stage with a puncture before two spins caused the Indian driver further delay and handed Lappi a lead of more than two minutes starting Sunday’s final leg.

Although Gill went quickest on today’s opening two stages, his pace did little to trim Lappi’s commanding advantage, which grew considerably when Gill retired at the completion of stage 15 after his Fabia Super 2000 suffered a rear strut failure.

“It broke off in a straight piece of road,” said Gill, who had started the gravel event leading the APRC. “I didn’t hit anything but maybe it had fractures in it from somewhere else. I’m really disappointed but we will fight back on the next round in Malaysia.”

Gill’s failure to finish means that Lappi – who had struggled for confidence on Saturday morning due to inconsistent grip levels on the damp forest stages – now tops the championship standings once again with an advantage of 6.5 points over his team-mate. Privateer Simon Knowles was another beneficiary of Gill’s exit by wrapping up the FIA Pacific Cup, which was made up of the opening three rounds in New Zealand, New Caledonia and Australia.

Subaru Impreza driver Sanjay Takale, from India, won the FIA APRC Production Cup and scored runner-up APRC points to maintain second place in the overall standings, having slipped back with a puncture on leg one.

Japan’s Hiroshi Asakura claimed two-wheel-drive honours in a PROTON Satria Neo. But there was despair for his Cusco Racing team-mate Michael Young, who rolled his Toyota Vitz on stage 15. “A bump in the road caused the car to unbalance sending us wide and into a bank,” said Young. “We then spun backwards down the road and somehow ended upside down in the ditch.”

The accident compounded a tough weekend for the emerging New Zealander, who was slowed by a puncture on Saturday.

WHAT THEY SAID:
Esapekka Lappi (Finland), first position: “This win means a lot and is really good for the championship. It’s sad our team-mate Gaurav had some problems and had to retire but we certainly enjoyed the rally. We had some confidence problems to start with but found our confidence yesterday afternoon. But the last two stages were horrible actually, narrow and very slippery. We had to drive very carefully.”

Simon Knowles (Australia), FIA Pacific Cup winner: “We’ve had a great weekend and to get the Pacific Cup is just incredible. We really feel for Gaurav but to finish first, first you must finish. Considering there is only four of us; myself, Margot and two service crew guys, we never expected this but we’re really happy.”

NEXT ROUND: Malaysian Rally, August 23-25