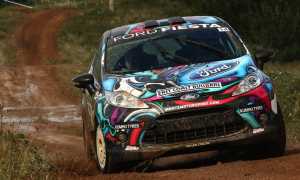 Canberra rally driver, Adrian Coppin is looking forward to the opportunity to lock horns with the FIA Asia Pacific Rally Championship’s (APRC) young gun, Michael Young in Round 3 of the championship, to be held on the Sunshine Coast this weekend.

The FIA APRC rally series is contested on events in China, Japan, Malaysia, New Caledonia and New Zealand as well as Australia.

“I am really looking forward to competing against Michael this weekend.” Coppin said. “I don’t know much about his car as it only made its debut at the New Zealand round a couple of months ago but he [Young] is a making a name for himself in the regional championship. He has a similar level of experience to me [Coppin] and is driving a car that is of a similar specification to mine, so I am keen to see how our times compare. I am looking to increase my speed, so competing against strong competitors like Michael in comparable vehicles helps push me to find my limits.” Coppin said.

Coppin had a good result in this event last year, finishing 3rd outright in the 2WD event and having his first taste of the podium champagne and is hoping to taste the rewards again.

There is also a slightly more pragmatic reason for entering the APRC event as well, and that is the television audience. “Both my major supporters, Ford and Castrol, are global brands so the opportunity to reach 463 million households in 183 countries via the television coverage of this round of the APRC is an important commercial consideration as negotiations for next year get underway” Coppin said.

Before the event starts, with a Super Special Stage at the Nambour Showgrounds on Friday night, Coppin will test his Ford Fiesta R2 in the Mary Valley on Wednesday, complete recce of the special stages on Thursday and undertake a range of promotional duties for the APRC.

The team is cross entered in the Australian Rally Championship and will secure points for Ford in the manufacturer’s title. Ford is currently 3rd in this title chase.

PHOTO: Michael Young driving his Toyota Vitz RS at Round 1 of the 2013 FIA APRC.