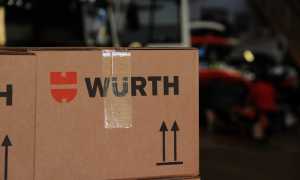 The FIA Asia Pacific Rally Championship is pleased to confirm a partnership with German market leader in assembly products Würth, who will become an official supplier to the APRC.

‘Car Rallying is the ideal stage to demonstrate the strength and durability of Würth’s vehicle service and tool brands. High quality products and tools are an integral part of this spectacular sport” said Würth Asia-Pacific manager Benjamin Würth. “Rally Sport is high-speed and Hi-tech, but unlike motor-racing its usually held in extreme and rough conditions. Skilled engineers and technicians maintain the rally cars at every opportunity and they will utilise our products and expertise throughout the whole seven round championship”.

Würth is a worldwide leader in assembly products within the automotive, construction and engineering industries and a large range of Würth products, along with technical advice will be available at every APRC event.

“The partnership with Würth is a great boost for the championship and a fantastic incentive for the teams and competitors. In 2013 car manufacturers from Japan, Malaysia and Europe will enter the APRC. Add major teams from India, Japan, Malaysia and China and the Würth initiatives reach right across automotive and manufacturing industries in the region” commented APRC president Steven Kennedy.

The 2013 FIA Asia Pacific Rally Championship begins with the New Zealand’s high-speed Rally Whangarei on 17-19th May, followed by events in New Caledonia and Queensland Australia. The championship then moves to Asia starting with the Malaysian Rally (Johor Baru) in August, followed by Japan, China and the final event the Thailand Rally in December. Manufacturers and drivers from around the world compete in the championship and the APRC is seen by millions of TV viewers globally. Further information is available at www.fiaaprc.com and www.aprc.tv