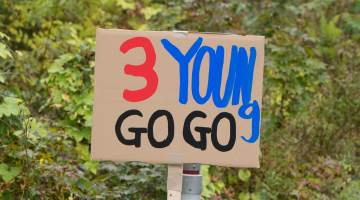 A trouble free run has seen Team MRF Skoda driver, Gaurav Gill, emerge as a clear leader at the fourth round of the Asia Pacific Rally Championship (APRC) this weekend at Rally Hokkaido in Japan.

Capitalising on his vast experience, Gill (India) was able to pull away from the other front-runners early on in his Skoda Fabia R5 and maintained his lead throughout the day to finish almost a minute and a half ahead of his rivals.

“It’s been a good day. I’ve had good rhythm and speed, it was smooth sailing with Stephane [Prevot, co-driver] and that was something I was nervous about prior to the rally. But we have really good setup, although we made a few changes to the car and it’s working very well and I wish to continue like this tomorrow,” said Gill.

Meanwhile, his German team-mate Fabian Kreim managed to fight his way back into second after a troublesome morning, which saw him with very little rear grip and a puncture on stage four. “So far not bad for the first time here. It was not so easy, there are very deep ruts and a lot of deep gravel, but so far we are satisfied. The car setup is getting better and better and we will keep trying tomorrow. I think some more changing on setup tonight and then we will see,” said Kreim. 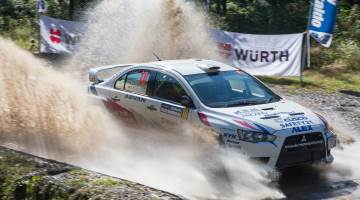 New Zealander Mike Young also suffered a puncture in exactly the same place as Kreim, as a section of a cattle grid (or grate) became dislodged and caused punctures to multiple competitors; all on the right hand side of the car. Young had managed to hold second place all morning, but fell to third at the end of the first day after suffering from a second puncture, like other competitors behind him.

“We’re reasonably happy with that [third]. It’s a shame our battle with Fabian [Kreim] ended with a flat tyre but we were going okay before that. The second flat tyre cost us quite a bit of time but the rest of the stages were good,” said Young.

Coming in fourth is local Japanese driver Hitoshi Takayama in a Subaru Impreza, less than a minute behind Young and said he will push hard to get that final podium spot.

“It’s good. I’m really enjoying competing with Young but he’s very fast and I try to attack tomorrow. I’ll push hard and check the pace-notes several times tonight. The car has no problem and the driving feel is good,” said Takayama.

Rounding out the top five is Satoshi Imai in a Mitsubishi Evolution, who came close to “coming off the road” earlier in the day. “I think I have done what I have to do. Tomorrow I just keep position” said Imai. His co-driver, Jason Farmer, said, “we’ve had two punctures today which cost us about 50 seconds, so it’s a bit frustrating but we’ll keep going.”

APRC registered driver, Sanjay Takale, also has troubles getting grip on the slippery road surface this morning although he feels the grip is increasing, therefore so is his speed. “It was a good day. I think we starting going faster the second time around, more confident. I think after a break of one year, it is good to be back in action and get more seat time, said Takale. 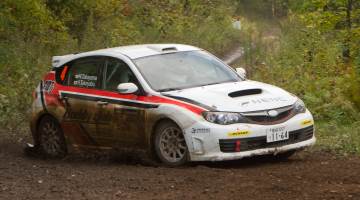 However, the day was packed full of drama for many other competitors. Yuya Sumiyama, in a Cusco Toyota Vitz, retired after the first stage with a driveshaft issue but looks likely to return tomorrow for day two.

Dinesh Deheregoda is not set to return tomorrow after he was forced into retirement with a broken gearbox after the first stage this morning, where he lost almost an hour. It is an unfortunate twist for the Sri Lankan driver who has attempted Rally Hokkaido multiple times but has suffered from mechanical issues each time.

Rally Hokkaido continues tomorrow with seven special stages, starting at 6.00am local time. The rally is then set to finish at approximately 17.40 local time near Obihiro after a short super special sprint near the main service park.