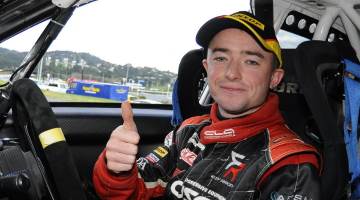 Rally driver Michael Young will be racing for a podium in his Cusco EZY Racing Subaru at this weekend’s International Rally of Queensland, the second round of the Asia Pacific Rally Championship (APRC), based around Australia’s Sunshine Coast.

As the only registered New Zealand driver competing in the APRC against drivers from all around the world, the 23 year-old says his main focus is on the overall APRC championship though admits the Queensland roads are tricky to get right.

“We’ll attack this rally the same as the others… Malcolm [Read, co-driver] and I will start off nice and easy with a nice clean run then build up our pace. I know how devastating the roads can be and how easily you can get caught out, so you need to drive with a level head and not have too many moments,” said Young.

“Although in saying that, I really enjoy the roads in Queensland. They’re very narrow and really fast so you’ve got to be committed every where. If you’re not committed you lose a lot of time. That’s why Queensland is such a big challenge.”

Another challenge for Young is APRC newcomer and star German driver, Fabian Kriem, who Young says will be his biggest rival and whom is piloting a brand new Skoda Fabia R5.

“He’s [Kreim] got a really good car [Skoda R5] and he’s young like me so is quite fast. While he doesn’t have any experience of Queensland, and his gravel experience is limited, I’m sure he’ll be going faster as the rally progresses. I’m sure we’ll have a good close battle throughout the weekend and he’s one to watch out for.”

Hamilton based co-driver Malcolm Read joins Young again as his co-driver and says he’s also looking forward to the Australian event. “After our strong comeback in New Zealand, I’m sure Mike [Young] and I can challenge for a podium finish. He’s definitely a talented driver and we have a great team behind us,” said Read.

The duo’s Cusco EZY Racing team have only made subtle setup changes to their Subaru Impreza since New Zealand as the roads are similar in many ways, which may be a blessing for Young as he hasn’t had much driving practice since round one [International Rally of Whangarei, New Zealand].

Sri Lankan-based sponsor, EZY Racing, is also bringing five top level executives out to Australia to support Young and ride shotgun with him during testing, as they want to help make Young’s global aspirations come true.

The International Rally of Queensland gets underway with a ceremonial start on Friday at Black Swan Park near the Maroochydore waterfront. Teams then contest 240 competitive kilometres across 16 closed special stages on Saturday and Sunday before finishing at the Imbil Showgrounds, near the rally stages.