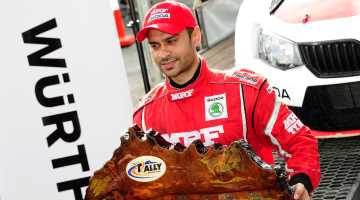 The first round of the Asia Pacific Rally Championship (APRC) came to a dramatic close today at the International Rally of Whangarei with the battle for first coming down to the final stages before eventually being won by Gaurav Gill.

Gill (India) with co-driver Glenn Macneall won the event today in their Team MRF Skoda R5, despite having to claw back a four-second deficit to the team-mate, German driver Fabian Kreim across today’s six stages.

Following the rally, a relieved Gill said: “It’s a great result for me and for the team. We like this rally and it always teaches you a lot, and today we managed to push a bit harder and got the desired result.

“Although I’m still learning the set up of the car and we haven’t quite found the perfect setup. We still had a few small issues but the team fixed them quickly which was great. And of course driving this car wasn’t very easy to start with because I haven’t driven at all for seven months. It’s a big challenge but I wanted to make the most of it so we took it step by step.” 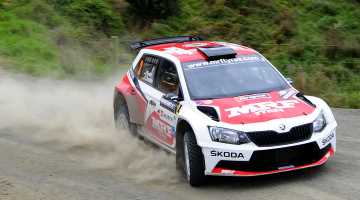 New Team MRF driver, Kreim and co-driver Frank Christian (Germany) put on a spectacular drive by finishing in second overall, only 30 seconds behind the winners, in what was their first ever gravel event.

Kreim said: “This is great! Unbelievable! It is a really nice feeling and I think for the first time on gravel, I found a very good speed today. On the last stage it was raining a lot and very slippery on the tarmac section. But I really enjoy it.

“The Skoda was very good. Many thanks to the team, Team MRF and Skoda Motorsport for the perfect car. It worked very well and I look forward to the next event.”

The European duo now fly back to Germany to compete in two German Rally Championship rounds before heading back to Australia for the second round of the APRC. 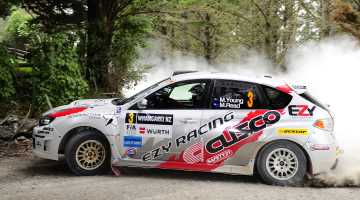 Meanwhile local driver Michael Young with co-driver Malcolm Read also put on a stellar performance in his Cusco EZY Racing Subaru Impreza and kept up with the Team MRF Skoda’s to finish in third, despite receiving a 14 minute time loss at the start of the event due to an electrical issue at the super special stage on Friday night.

“I’m pretty happy with that [third place] after Friday night and the disappointment of a 14 minute penalty. I think we showed pace this weekend and we won quite a few stages outright in both the APRC and NZRC [New Zealand Rally Championship],” said Young.

“Obviously the penalty was hard to swallow because we might have finished further up the podium but I know I’ve done my job and I’ve been driving quick all weekend. We will be back again to fight for another podium, and Australia is always a round I enjoy.” 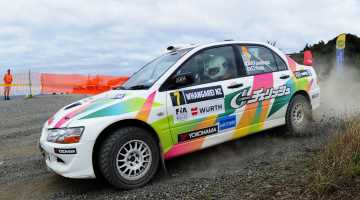 Young’s Cusco Racing team-mate, Sanjay Takale (India) suffered further issues today in the first stage of the morning after contact with a bridge so were forced to retire again.

The trio of Japanese teams also struggled throughout the weekend with only the pairing of Makoto Kawahara and Osamu Yoda making the finish in their Mitsubishi Evolution.

Yesterday also saw the unexpected and early retirement of Australian front-runner Scott Pedder following a mechanical failure in his Renault Clio. “Rally cars don’t tend to go far with a hole the size of a fist through the bottom of the engine,” said Pedder. “It looks like a rod has punched a hole through the block and taken the oil and water lines out with it.”

The next round is based around Australia’s Sunshine Coast at the International Rally of Queensland on 18 and 19 June. It is the second round based around the Pacific region and will see crews battle it out over 16 closed special stages totalling 240 kilometres.