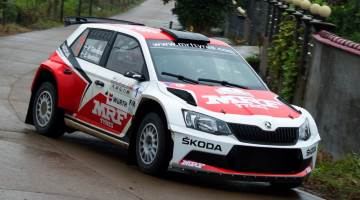 The final instalment in our wrap-up of the 2015 APRC and the top-ten drivers, it’s time for number one, the Asia-Pacific Rally champion in 2015, Sweden’s Pontus Tidemand.

Arriving at the first round in New Zealand very little was known about Tidemand in the Asia-Pacific region except that he had recently been contracted to drive for Skoda. With a long-term view Skoda assigned Tidemand to the APRC where they knew he would benefit from competing in the gravel based series that starts on the fast cambered roads in New Zealand and finishes in the bamboo mountains of the China Rally, while along the long way competing in New Caledonia, Australia, Malaysia, Japan on numerous surfaces, hugely differing climates and dealing with multiple cultures.

Click here to see how Pontus claimed the 2015 APRC Title

Driving for the MRF Skoda team in an S2000 Fabia, Tidemand didn’t disappoint winning the Rally of Whangarei by two minutes, although to be fair his main competition and team-mate Gaurav Gill from India was hobbled by drive-shaft problems for most of the whole event. 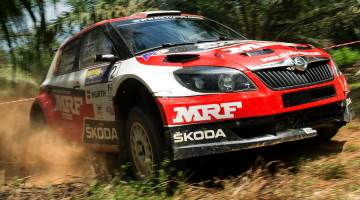 Tidemand made a small mistake at the start of the Rally New Caledonia, losing time he couldn’t make up and sensibly settling for second place and points behind Gill. Australia’s Rally Queensland proved to more difficult than expected, but Tidemand didn’t let it faze him, staying in touch with Gill and taking the lead early on the second day, then cruising to victory when Gill’s engine let go not far from the finish.

Malaysia was a real test for the Swedish driver, humid and ‘hot as hell’, the only way to describe the conditions in the Palm Oil plantations. Both MRF Skoda’s were troubled by long grass getting in the radiators and it seemed who-ever was car number one on the road suffered the most – and for the first day that was Gill. Tidemand had the same issues but lost less time and dually won the event.

Japan’s Rally Hokkaido turned out to be wet and no contest, when Gill retired early – the same problem as New Zealand – drive shaft problems. The weather and conditions worsened and Tidemands biggest competition then came from the pouring rain and standing water. The roads in Hokkaido get very rutted and when it rains that’s where the water collects and runs – like rivers and at over 160kph its very easy to aquaplane off into the forest. Reward came at the end of the event with the championship sealed: FIA APRC drivers, co-drivers and manufacturers titles. 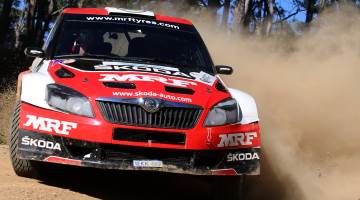 Skoda flew in a Skoda R5 for Tidemand to drive at the China Rally – their biggest market and most important APRC event of the year. Having won the WRC2 class at WRC Rally of Spain the previous weekend Tidemand arrived in China on a high and eager for a repeat win. While he certainly had the quickest car, China Rally unique challenge is the mixture of surfaces, fast but deceptively slippery concrete stages followed by muddy mountain tracks.

This year persistent rain added another challenge and yet again Tidemand delivered, bringing the R5 home nearly half-an hour ahead of his closest Group N rivals. Arriving back at the service park his Skoda bosses were there to greet and congratulate him on five wins and a second from six events, plus three FIA titles “It’s been absolutely fantastic, so happy I could do this championship a lot of good experience and good memories. It’s memory for life”.