From an article printed in the sunshinecoastdaily.com.au prior to International Rally of Queensland. Written by Scott Sawyer and photo of Murray Brown by Patrick Woods.

Precision driving and a seamlessly run event is what most punters will experience at this weekend’s International Rally of Queensland event in Imbil and Caloundra. But behind the flying dirt and expertly navigated corners, it’s not always smooth sailing.

The man tasked with bringing together the logistics for the FIA Asia Pacific Rally Championship yesterday shed some light on what goes into delivering an international motorsport meet. APRC coordinator Murray Brown gave an insight into the globe-trotting juggling act he maintains, as he shifts teams and tyres all over the world. 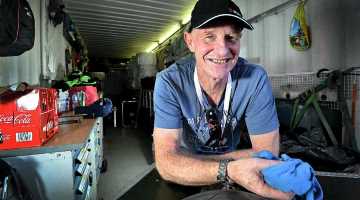 “It’s a bloody big challenge, there’s no two ways about that,” Mr Brown said. “I liken it to juggling, there’s about six balls in the air and you can’t afford to drop one.”

While the teams have based themselves in Caloundra, with racing action at Imbil, it’s a shipping container city that reveals the intricacies of the sport. After the last race on Sunday, most teams will have packed up, washed down and fitted their equipment back into their private container within hours, ready for it to be loaded and shipped off to the next round of racing.

A month ago, teams, cars and equipment went through that exact process, packed and stacked in New Caledonia, before landing in Australia for this weekend’s events.

Amazingly, mishaps were few and far between. “If the containers are lost or missing, that’s tough,” Mr Brown said. “We’ve had some close calls over the years, cars arriving at events a day before the rally. “Every event has its challenges, there’s always something that crops up.”

Once the cars are unloaded, containers double as workshops, massage rooms and team offices, depending on the team’s budget, with an average of six-to-eight people making up a team.

Mr Brown is for the most part a solo act, aided by agents based in other event locations, as they work to orchestrate what at times can be a huge gamble on shipping timetables. And there’s plenty to consider.

“Most competitors would be going through anything from 20-24 tyres per car for the weekend this weekend,” he said. “For a two-car team there’s about 300 tyres in the team’s container, that’s tyres for all sorts of conditions.” International quarantine also posed challenges of its own, with Australia and New Zealand incredibly strict on the APRC teams, Mr Brown said.