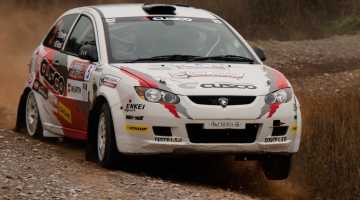 Mike Young, New Zealand’s only competitor in the 2014 Asia Pacific Rally Championship (APRC), finished second in the APRC overall drivers’ championship and simultaneously wrapped up the prestigious Production Cup title after finishing third overall at the China Rally, held in Longyou over the weekend.

Joined by co-driver Malcolm Read, Young drove his Cusco Racing Proton to the team’s third title this year after already securing the Junior Cup and Two-wheel-drive Cup following their strong season which saw them finish every rally on the APRC calendar.

Young said: “That consistency has rewarded us with second place in the championship, and that result [second place] against four-wheel drive and S2000 cars in 1.6 litre two-wheel-drive Proton is just awesome.

“Adding the Production Cup to our list of trophies is also a great feeling. We’ve worked incredibly hard at every event this year so it’s nice to have all of our hard work pay off. We’ve looked at everything from our pace notes, to my driving style, and introduced a game-plan for each event and it has all been worth it.”
Young also adds that his hard-working Cusco Racing team has been full of incredible support in his campaign towards his three titles in 2014, after he also secured three APRC titles in 2013 (Asia Cup, Two-wheel-drive Cup and Junior Cup). 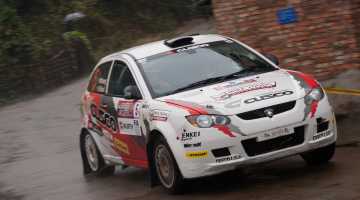 “Cusco has done an absolutely amazing job again as there has not been a single mechanical problem at all this year plus they gave me another great car. Malcolm [Read] has also done an awesome job as he helped me to find the fine-line between being on the pace but avoiding trouble.

“In fact, ever since Malcolm [Read] jumped in the car, my rally career turned around. We’ve now finished nine rallies in a row together and I think that’s a real credit to the way we work together plus his professionalism and skill,” Young explained.

The Production Cup title didn’t come easy for Young however, as Australian rival, Mark Pedder, chased him down and the final round at the China Rally was “tougher than expected.”

Young reported that heavy rain made the roads slippery and the frequent big rocks made driving hazardous but ultimately, Young’s clean sweep of finishes this year meant he had a great points advantage that simply could not be beaten. 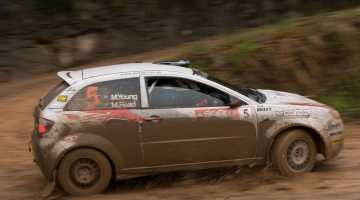 Finally, Young adds: “I just want to say a massive thank you to all of my sponsors and fans for all of the support this year. It has been absolutely incredible and I just can’t thank you all enough. I do have to give a special mention to Cusco, Dunlop and Yoda Rallying though as they’ve been particularly supportive this year.”

Young and his team now shift their focus to plans for the 2015 rally season with details not ready to be released yet.

To keep up to date with Michael Young and his team during the off-season, head to: https://www.facebook.com/MikeYoungMotorsport