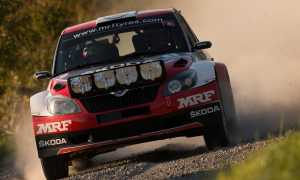 Czech driver Jan Kopecky and co-driver Pavel Dresler have taken an unassailable lead in the 2014 Asia-Pacific Rally Championship after winning the Hokkaido Rally in Japan.

Driving his Team MRF Skoda Fabia S2000, Kopecky initially trailed his team-mate, India’s Gaurav Gill, but took the lead when Gill slid off the road and out of the event on stage eight.

It’s the fifth APRC title for Team MRF, and their third in a row, with Gill winning in 2013, and Australian Chris Atkinson taking the title in 2012. The win also secures the Manufacturers’ Championship for Skoda for the second year in succession.

“The car was great, the team was great,” Kopecky said after the event.

“I’d like to thank all the guys from our team. They did an amazing job these past five rallies and hopefully we can do it again in China.”

Heading into the fifth round of the 2014 series, only eight points separated Kopecky and Gill, with the Indian determined to win in Japan and push for a second title.

He and co-driver, Glenn Macneall, led the event after the first seven stages, but then slid off the road and out of the rally on the following test. 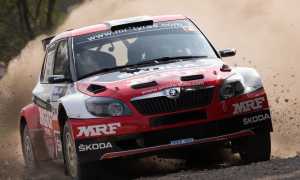 “It’s unfortunate what happened to Gaurav, we were having a good battle, but these roads are very unforgiving,” Kopecky said.

“Our plan was to keep the same safe pace, especially through the long stages. It’s great to finish and win the APRC Manufacturer’s award for Skoda.”

Team MRF team manager, Lane Heenan, was naturally thrilled with the win and was happy to see Kopecky win his first APRC title.

“To win our third APRC title is a fantastic result and I must congratulate our whole team for the effort they have put in to achieve this success.

“Jan has done a brilliant job so far this season, quickly coming to grips with events he hasn’t contested before, and his performance has been first class. It shows the quality of driver that he is.

“It’s unfortunate that Gill’s title hopes have come to an end,” Heenan added.

“We knew that with both drivers pushing for the title there was always the possibility of an accident, but of course we hoped that wouldn’t happen.

“We now head to the final event in China with the goal of securing a 1-2 in the Asia-Pacific Rally Championship.”

The next event in the 2014 Asia Pacific Rally Championship is the China Rally, from November 4 to 7, where Team MRF plan to make it six wins from six events this season.