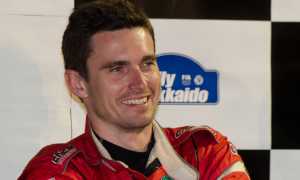 MRF Skoda driver Jan Kopecky has the won the Rally of Hokkaido and at the same time becomes the 2014 Asia Pacific Rally Champion, with one round to spare. “ The car was great, the team was great. I’d like to thank all the guys from our team. They did an amazing job these past five rallies and hopefully we can do it again in China”.

The event was initially led by Kopecky’s team-mate Gaurav Gill from India but on stage 8 Gill understeered off a corner, down a bank and into a tree. The Skoda Fabia was seriously damage and unable to re-start the next day and therefore Gil left Japan with no point and no chance of retain the drivers title he won in 2013. 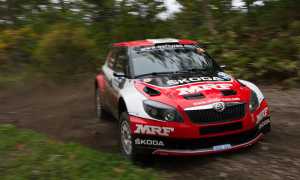 Hiroshi Yanagisawa finished second of the APRC registered drivers and a great result for the new Cusco Subaru WRX Sti. The car was very competitive on its first outing and even with very little pre-event testing looks to have plenty of potential once it’s fully FIA homologated.

Cusco took the third place on the podium too with Yuya Sumiyama from Japan third and first of the Asia Cup contenders. With his second in Malaysia and main rival Gill not finishing, Sumiyama takes a 12 point lead over China’s Jun Xu.

Xu had a troubled rally and was never really able to think about challenging the leaders. Damper issues were the main problem and Xu will be hoping for a better run in at his home event in Novembers China Rally. 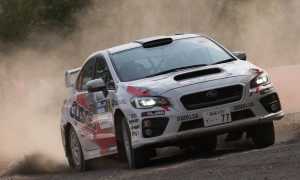 Sanjay Takale from India finished 5th driving a Cusco prepared Subaru Impreza. “This was our goal to come here and win a round of the Production Cup as this will my last APRC event of the year. We’ll be back next year though, preparation for that begins now” said Takale at the finish.

Takale may have won the round but the new Production Cup leader is New Zealander Mike Young in his Cusco 2WD Proton Satria. The next APRC event in China Rally will be the decider in this category, although Young only needs to finish to be assured of his third title for the year. 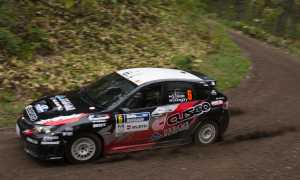 Asia Cup entrant Tomohide Hasegawa was 7th in APRC and picked up valuable points in Asia Cup. Although not expected to be in China, Hasegawa will compete in Thailand the final round of the Asia Cup.

EZY Racing a new entrant to the APRC had a tough time in Hokkaido with strange noises coming from the LSD and drive shalfs from Stage 1. With no way to fix the problem Sri Lankan driver Dinesh Derereagoda was forced to cruise to the finish, although the car appeared to have other ideas once it reached the finish podium reversing to move with a stuck hand-brake.

The next event in the 2014 Asia Pacific Rally Championship is the China Rally 4-7 November.