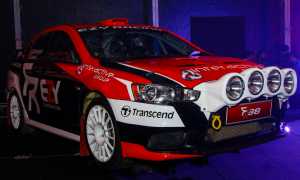 Dinesh Deheragoda, multiple Sri Lankan rally champion, is set to become Sri Lankas first international racing driver, with the announcement he will contest the Asia Cup rounds of the APRC.

At a gala unveiling EZY Racing launched the Mitsubishi EVO X that Deheragoda will pilot at rallies Malaysia, Japan, China and Thailand. The exclusive launch event was attended by APRC Coordinator Murray Brown and Shahid Mahmud, CEO of the Dubai-based Interactive Group, which is EZY Racing’s principal sponsor.

“Our vision was first to start local and then go on to become the very first Sri Lankan team to represent the country overseas in a FIA sanctioned event”, commented EZY Racing’s Shafraz Hamzadeen. “Today, we announce the beginning of our international journey in motor racing.”

Multiple national champion Dinesh Deheragoda has won over 272 podium finishes in an illustrious career spanning over 17 years, and has previously competed in three international rallies in privately entered cars. “I feel proud to be a part of a professional racing team. (The) car which is fully prepared and equipped to be competitive as it could possibly be. I believe that the car should perform well. I guess with a few outings I should be able to challenge (other other APRC competitors) and establish a strong presence in the future,” said Deheragoda.

And although EZY Racing will compete in the Asia Cup this year, team chief Hamzadeen explained there is a five year plan in place to build EZY Racing into a major force in APRC, with the intention to contest the full championship from 2015 onwards.