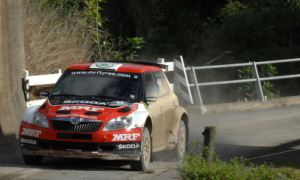 Next month’s VINZ International Rally of Whangarei brings teams and crew from countries such as India and the Czech Republic for New Zealand’s only FIA* international grade rally event for 2014.

Held from 11 to 13 April the event uses 241.11 km of flowing rural roads in the Far North and Whangarei regions of New Zealand’s upper North Island to test man, woman and their machines across closed sections called special stages. Teams competing score points toward either the opening round of the FIA Asia Pacific Rally Championship (APRC), Brian Green Property Group New Zealand Rally Championship, driven by VINZ (NZRC), or the Top Half Rally Series (THS). With the aim of setting fastest time across each of the 14 special stages, cars competing include latest specification factory backed ŠKODA Fabia S2000 4WD’s to yesteryear era Ford Escorts.

Based in Whangarei for the weekend, the teams service park and event headquarters are centred on the Quayside Town Basin – for the eighth consecutive year.

“Planning and organisation started straight after last year’s event and has been on-going for the past ten months. When each significant aspect is confirmed all the details bring greater demand as organisers, to where we have two staff now dealing with just administration,” says Laurie Brenssell, chairman of the organising committee – Rally of New Zealand.

“Plus there is a team that deals with the route plotting and getting all the mathematics lined up to ensure every aspect flows from the timing marshals, competitors, safety personnel, through to clean-up crews. Then there are the special stage co-ordinators and personnel looking after the likes of the start and finish ceremony.

“It is a very labour intensive process and that’s where support from rural road residents, their community groups, volunteers and local organisations such as NorthTec, provide additional personnel to make it all work. We’re also fortunate to have assistance from the Whangarei District Council who provide liaison with the local community and the ability to hire the much needed venues to make the weekend successful.

With over 40 years of operational expertise available from the event’s organising body, Brenssell says the Rally of New Zealand team brings essential resource to ensure everything runs smoothly.

“As New Zealand’s only FIA grade international rally event for this year every aspect of its operation is continual refinement for running Rally New Zealand – the World Rally Championship (WRC) event. Television footage of the event will be broadcast to 120 countries, giving us great exposure for when we return to the WRC calendar.”

Heading the line-up will be the factory backed ŠKODA team including 2013 defending APRC champions Gaurav Gill (India) and Glenn Macneall (Australia). They are joined this year by defending European Rally Championship pairing Jan Kopecky (Czech Republic) and Pavel Dresler (Czech Republic). In addition there will be teams from Japan, Australia and New Zealand – with others to be confirmed.

Following Friday night’s ceremonial start from the Cameron St Mall, teams embark on the competitive sections of the event from early Saturday morning. Adding to the competition stakes will be the number of new competitive tests – including the Saturday night running of the Hella Pohe Island Super Special Stage – at Whangarei’s William Fraser Memorial Park. After that, and a second service break, the cars will be parked overnight before resuming competition early Sunday morning. They then return to the Quayside Town Basin for a ceremonial finish from 3pm in the afternoon.

Spectating at the start, finish and Quayside Town Basin service areas are free with access to rural viewing points costing just $10 per adult per day and $15 for the Hella Pohe Island Super Special Stage. Children under the age of 15 are free with a paying adult and paddock parking is available at some locations for a gold coin donation.
A share of all spectator ticket revenue goes to the local community groups that help run the spectator viewing areas.

Entries in seeded start order will be published on Monday 31 March.

* The FIA is Federation Internationale de l’Automobile, the world governing body of motorsport.