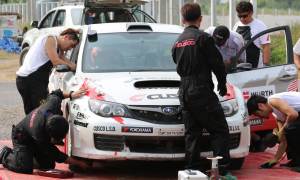 This weekend is Thailand Rally – Kings Cup, the final round of the APRC’s Asia Cup.

Thailand is in the news for all the wrong reasons at the moment, however there is no sign of the unrest taking place in Bangkok and as its the Kings birthday this weekend those troubles seemed to have slowed for the moment. Thailand Rally is based at Saha Farms complex near Lophuri, 140 kilometres north-east of Bangkok.

After a win in Malaysia and 2nd place points in Hokkaido, Japanese driver Shuhei Muta in a Group N Subaru Impreza leads the Asia Cup by 22 points, from his Cusco team-mates Yuya Sumiyama and Michael Young – equal second on 46 points.

Last year’s Asia Cup winner Sumiyama, also driving a Subaru had a poor start to his 2013 campaign with engine failure in Malaysia, but a win in Hokkaido has put him back in with a chance to retain the title. But even if he wins outright, Sumiyama can only take the title if Muta has a DNF or finishes lower than 5th place.

With two solid finishes, New Zealander Michael Young has put himself in contention for the cup title, although given he’s driving a 1600cc front-drive Toyota Vitz he’s going to have to rely on both his team-mates having problems in their turbo 4WD cars. “My main aim here is to make it a Cusco 1-2-3 in the Asia Cup, but to do that I have to stay ahead of Hasegawa too”. 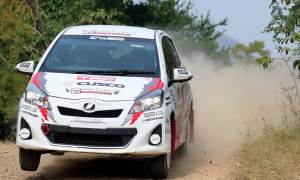 Another to have finished each of the two events so far, Tomohide Hasegawa driving the Hasepro Mitsubishi Evo 10 is fourth with 38 points.

Other contenders include India’s Sanjay Takale (23 points) driving an MRU prepared Subaru Impreza . Takale had a DNF in Malaysia and scored all his points in Japan where he also wrapped up the Production Cup. Thailand’s Chaiyan Longton who had a stand-out performance in Malaysia with third overall, didn’t compete in Japan but starts his home event with 25 points.
From Sri Lanka comes Dinesh Deheragoda driving a Mitsubishi Lancer Evo 10, new to the series but hoping to get some experience for a 2014 APRC campaign.

After two days of recce the drivers report the roads in good condition, narrow, rough in parts and as there’s been no rain for weeks, there is lots of dust.

A 24 kilometre all tarmac stage on Day 2 will add to the mix of surfaces and tyre strategy. Shakedown and the official start is today (Friday), followed by two days of competition over 230 kilometres.