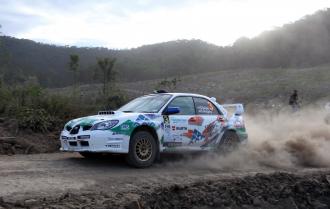 Indian driver, Sanjay Takale, has driven himself to an excellent second place in the Asia Pacific Rally Championship (ARPC) drivers’ standings after featuring in the points table at all three events held so far this season despite going head to head against factory based teams.

Privateer driver, Takale, has been the only registered driver in the APRC championship who has not only finished every round, but also scored points at all three events in 2013, against leading drivers, Esapekka Lappi, and experienced compatriot Gaurav Gill, despite finding the roads in New Zealand, New Caledonia and Australia tricky.

“The roads, especially in New Zealand and Australia are very very fast compared to my home rallies like India and Malaysia,” explained Takale, “I do like the roads around New Zealand, Australia and New Caledonia but I am really looking forward to driving in Asia again because it is more like my regional championship.”

“We also have a new car this year so I was still trying to get used to that too. It has more horsepower than my old car but is very nice to drive.”

The MRU Subaru Impreza WRX made its debut with Takale at the International Rally of Whangarei in May and has seen Takale move further up the leader board at each event as he becomes familiar with the car’s features and handling.

However the main focus for Takale and his MRU team is now the Asia Pacific Cup which is set to be contested over three rounds held in Malaysia, Japan and Thailand, and while Takale remains optimistic about his APRC campaign, he is also well aware of the unexpected challenges he may face.

“The Pacific rounds were fantastic without a doubt as I scored maximum points and drove with confidence despite some problems in Queensland. But while second position in the APRC is very enticing, rallying is a difficult business and anything could happen in the next few rounds,” explained Takale.

“But Malaysia is like my second home. I drive the Subaru which is built and maintained by MRU Motorsports, who is a Malaysian based team, and I have been competing there since 2010 so I hope I can do well here.”
Ultimately though, Takale would simply like to win his class at the Malaysian Rally and extend his points lead over class rival, Hiroshi Asakura, of Japan.

“I want to finish well ahead of [Hiroshi] Asakura to gain maximum bonus points to seal up the N4 Production Cup class and not take the title fight to Japan. It would be wise for us to win in Malaysia because I have opted to skip the final round in China, where [Hiroshi] Asakura should be able to score maximum points, so we’ll try to extend the points gap beyond his reach here in Malaysia.”

The next round for Takale and the MRU Subaru team is the Malaysian Rally, set to be held on the 23-25 August, 2013 held near the city of Johor Bahru.

The photo is free to use for editorial purposes. Please credit Asia Pacific Sport Media. The first photo shows Sanjay Takale in action during the International Rally of Queensland in July.

For interviews, further information of alternative and/or larger versions of the images and any other media queries, please contact: