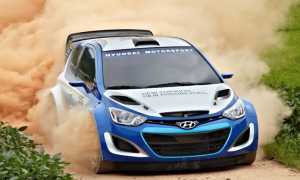 First Juho Hanninen, then Bryan Bouffier and now Chris Atkinson: Hyundai’s test driver roster continues to swell with the addition of the ex-factory Subaru pilot. Atkinson, 33, has been a bit-part player on the world stage since Subaru’s withdrawal at the end of 2008 but gets the chance to support the main Hyundai testers Hanninen and Bouffier for the remainder of the year.

“This is such an exciting project and to be a part of Hyundai’s push back into the WRC by helping develop the i20 is a massive thing to be a part of,” said the Australian. “After visiting the Hyundai Motorsport factory three weeks ago, I am hugely impressed by the team’s commitment and achievements so far. I have a lot of experience of many different WRC cars and events, and I will utilise this knowledge to support the development of the 2014 i20 WRC car.”

Atkinson’s last outing in the world championship was on Rally Mexico in an Abu Dhabi-backed Citroen DS3 WRC. He had been in line to return to the squad on Rally Finland but lost out to Kris Meeke.

As well as the Citroen, Atkinson has experience of Ford’s Fiesta RS WRC and the Mini John Cooper Works WRC, while he’s sampled Proton’s Satria Neo S2000 and a Skoda Fabia S2000 in the past, making him an ideal candidate for the Hyundai job.

Hyundai Motorsport chief Michel Nandan said: “It is great to be able to integrate Chris into [the] Hyundai Motorsport testing line-up for this season and I am convinced he will bring a lot of valuable WRC experience. Chris will support the work of our main test drivers Juho and Bryan. With the combined expertise of all three test drivers, we will be able to benefit from thorough and comprehensive input at every test session.”